What the code is Big O

If you have ever seen something like O(n) or O(2n) when looking at some algorithm, like a sorting algorithm, for example, that was Big O notation.

It's a way of describing or representing an algorithm's efficiency. How long is takes to run or how much memory it occupies (time or space efficiency).

Big O is a very useful concept for any programmer but is often neglected or not very well understood, by either programmers with degrees or those self-taught.

Understanding it will give you not only a better idea of how the most popular algorithms behave and perform but, more importantly: You will be able to better judge how good or bad your own algorithms can be.

And remember an algorithm could mean any particular piece of code you write to solve a particular problem, not just those you read online about sorting or searching things.

Here, it tells us that this algorithm scale is 1 or constant, no matter how big the input gets, it always takes the same time.

We don't know about the machine we are running this on or the underlying implementation of the array, so we don't take those into account. We are describing our algorithm

Let's look at another example: O(n):

The more elements we have, the more operations it takes.
Our algorithm takes longer the bigger its input n is.

If we were to graph the number of operations our O(n) algorithm would do, depending on the size of the input, it would look something like this: As we can see, this is a linear graph.
O(n) means linear time. (or space if that is what we are measuring).

Here are a few others that are most common:
O(1) is constant. No matter how big the input, always takes the same time.
O(N^2) (N^2 is the same as N2) is quadratic time.
O(2^N) is exponential time.
O(log N) is logarithmic time.

Here's how they look if we were to graph them: 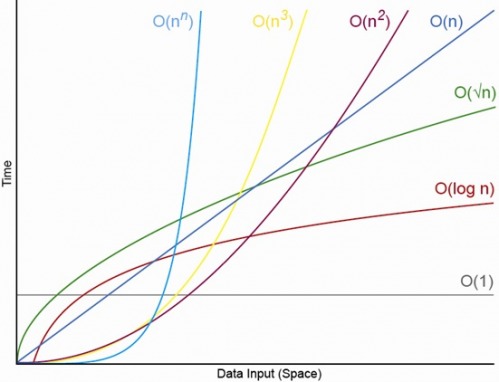 As we can see, some are definitely better than others. No one, if they could help it, would want to have an algorithm have O(n^n) runtime efficiency.

How Big O is measured

Hope for the best. Prepare for the worst.

As you've seen, Big O is a measurement. However, it is not meant to be scientifically precise. It would be very hard to find the exact O(..) of more complex algorithms.

In fact an algorithm can have different run times in particular scenarios or edge cases.
Instead, it is an estimate, generally accounting for the expected possible scenario, or most common...

For example, consider sorting.
Generally, if we try to sort an array that is already sorted, that is considered the best-case scenario, or if the array is completely reversed, that would be the worst-case scenario, where it would take the longest runtime.

Some other more complex algorithms may take orders of magnitude longer than their expected case. In most cases, though, the worst possible scenario is the same as the most common or expected one.

In order to simplify, Big O describes the expected scenario.
That means, we know that an algorithm, while it may take less time, it will never take longer than its Big O.

The Big in Big O is about Big numbers

As previously said, Big O reflects how an algorithm's efficiency scales, and by scale, we mean a big one.

This means that if we put really big numbers into a Big O representation with more than one term, we can often simplify it.

Something like O(2n) can be simplified as O(n), by dropping the constant.
If we think about it, when using really large n numbers, the 2 will have little or almost no impact on the overall performance. If you remove 2 pretty much the same.

What if we have something like O(2*2^n + 10*n) or O(n + n^2)?
The same rule applies. For really big numbers of n the bigger term will become far more impactful than all the others. We can drop the other ones and simplify it.

Remember, Big O describes how an algorithm's efficiency scales with its input.

That's why, generally, most algorithms can be expressed using the most common notation in the graph above. Because we can simplify a lot of the cases.

There is more that can be said about Big O.
To correctly use it for your own algorithms, or other people's, it takes some practice.
However just having a general idea of what it is and what the most common Big O's are, goes a long way to demystifying it.

Nest time you run into one of these, or someone mentions an "O of something" in a conversation, you will know.